Demystifying NVIDIA A100 GPU: When, Where, and How to Use 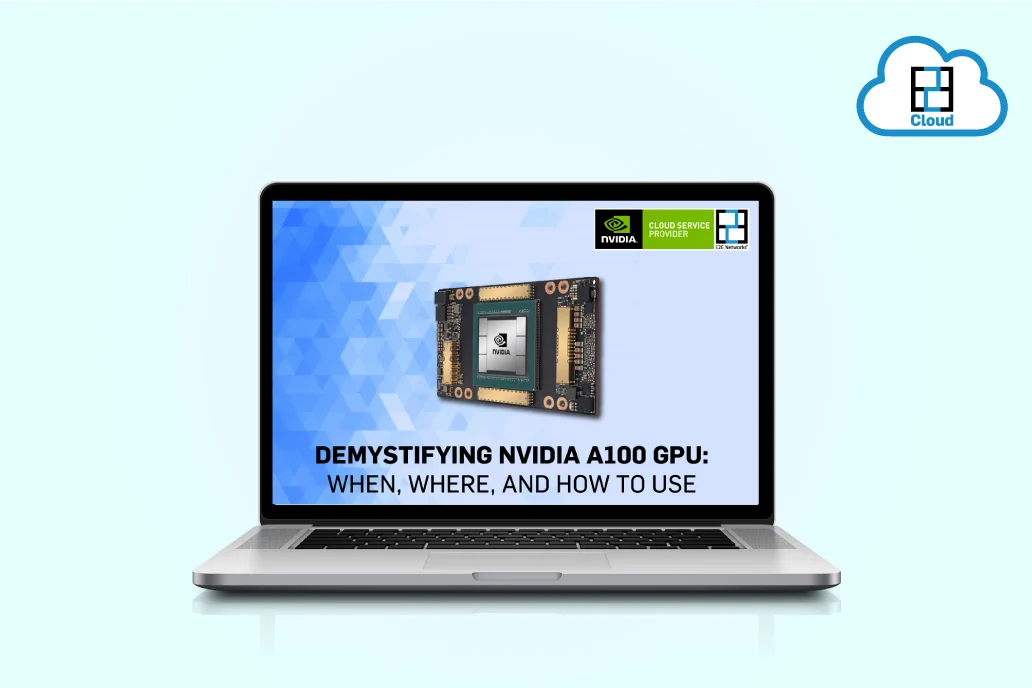 Breaking into the most compelling GPU announcements this year, the NVIDIA A100 GPU sets a new standard for data centres across the globe. Find out how.

In the wake of proliferating AI networks, NVIDIA introduced the new A100 Tensor Core GPU in May this year. Designed especially for HPC, AI, and data analytics, the A100 GPU promises significantly speedy performance beyond the prior NVIDIA Tesla V100 GPU. The A100 GPU is packed with exciting new features that are poised to take computing and AI applications by storm.

Built for modern data centers, NVIDIA A100 GPUs can amplify the scaling of GPU compute and deep learning applications running in-

Let’s take a closer look at the tech specifications of this brand new A100 GPU.

The announcement of the NVIDIA A100 Tensor Core GPU has rewritten history by delivering over 1.5 terabytes for frame buffer bandwidth. Below are some other unique features of this Ampere GPU-

NVIDIA affirms that the A100 GPUs crams 54 billion transistors onto an 826 mm^2 size of a die. It is considerably larger than the earlier models, namely NVIDIA’s flagship gaming card, RTX 2080 Ti, and the V100. This incredible transistor density (7-nanometer processor) along with a huge die size translates to almost three times the speed of RTX 2080 Ti.

Not only transistors but the A100 is also aiming high with 6,912 FP32 CUDA cores, 3,456 FP64 CUDA cores, and 422 Tensor cores. Together with the range of FP32 and the precision of FP16 results in no code change during model training.

Here’s the difference between the operating speed of the V100 FP32 matrix on the left and the A100 accelerated TF32 on the right.

Another mega introduction in the A100 GPU is the fine-grained structured sparsity that doubles the compute throughput for deep neural networks. Considering the heavy sparsity of most neural networks, the approach zeros out smaller weights to retrain the network with 2X data processing.

Such an amplified processing speed is extremely beneficial for applications involving precision and physics simulations.

Talking about hardware, the new multi-instance GPU (MIG) feature enables the A100 to be easily partitioned into seven separate GPU instances. NVIDIA offers these 7 GPU instances as part of their DGX A100 system to be adjusted like a pod into a server. This hardware utilization makes DGX ideal for 56 different users with each one of them experiencing an equivalent performance of a Volta.

When, Where, and How to Use NVIDIA A100 GPUs

Hardly four months after its release, the A100 has already become a star performer for tech giants.

Businesses worldwide are capitalizing on this remarkable collaboration of various cloud providers with NVIDIA A100 GPUs to build dynamic applications. Below are some effective use cases-

The ongoing digital transformation of businesses has exploded data ingestion from disparate sources. Thanks to big data analytics, data scientists can now make sense of enormous data, both structured and unstructured.

Earlier, GPUs were confined to perform domain-specific tasks with either training or inference. With NVIDIA A100, companies get the best of both worlds with an accelerator for training as well as inference. This means that A100 GPUs can not only support AI model training but also helps to analyze new models and make predictions. Applications like predictive analytics for healthcare, demand forecasting, business sales, and a lot more are now seemingly possible with A100.

Ultimately, the power-pack of NVIDIA A100 GPU awaits the tech industry to leverage it for innovating futuristic technology solutions.