How you should choose a cloud provider – 7 criteria

E2E Database as a Service (DBaaS)

The Functioning of VGPUs

At the start of the last decade, CPU was the mainstay for majority of the processing work that used to occur in various industries and sectors including complex calculations, engineering work, data management, analytics etc. The CPU was supplemented by the GPU (Graphics Processing Unit) for carrying out graphic intensive tasks such as CAD, simulations and renderings. However, advancements in GPU technology in the past decade with applications becoming increasingly graphic intensive, has changed how we looked at, used and leveraged the CPU-GPU combo. As per Lakeside Software, the graphics requirements of Windows 10 has increased by more than 50% as compared to Windows 7. 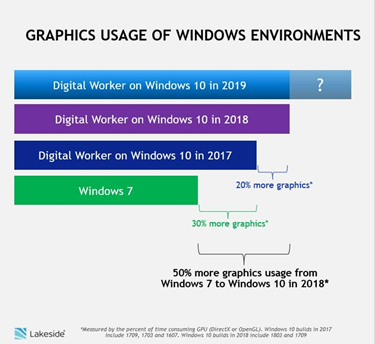 Remote desktops and workstations have been a part of several industries for a long time that require huge data processing. Businesses invest huge sums in building servers as well as operating and maintaining them. Virtual machine environments do away with dedicated  physical servers for each business and connect the endpoint systems to a cloud server. Virtual machines help businesses scale their operations at lower costs and turn normal PCs into high performing workstations. However, the initial virtualization technology depended entirely on the CPU for all the required tasks irrespective of the applications or specific industries and sectors.

Working of a GPU 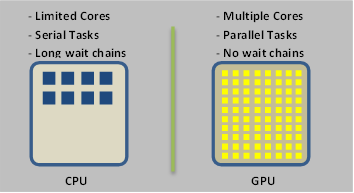 A GPU has multiple specialized computing cores designed to efficiently carry out graphic intensive work as against CPUs which are limited by core count. The CPU processes tasks as a scheduled sequence. Therefore, processing times on a CPU are simply much higher as tasks are sequenced giving rise to long wait chains. However, a GPU can carry out the same tasks in parallel without wait chains thus increasing processing speed and efficiency manifolds.

CPU vs GPU based virtualization

CPU virtualization creates virtual CPUs that are then allocated to different Virtual Machines for carrying out various tasks. All VMs are CPU dependent and thus hampered by the same bottlenecks and shortcomings of an individual CPU no matter how powerful it is.

Since GPU’s are built up of several computing cores, GPU virtualization based VM environments benefit from parallel task execution and unprecedented speeds that are not possible in CPU virtualization. Similar to CPU virtualization, GPU virtualization creates several vGPUs from physical GPUs installed in a server. These vGPUs are then shared or allocated as per the need  across VMs or physical desktops thereby turning them into powerful processing machines. The key difference is that the load that was borne by the CPU is now transferred to a GPU. GPU virtualization came into being when NVIDIA launched the virtual GPU in 2012.

These layers consist of a server with an installed physical GPU, the hypervisor, the virtualization layer, the vGPU, the NVIDIA driver and finally the VM and the applications. Let’s understand these layers

As mentioned before, the NVIDIA vGPU software has a driver for each VM. Depending on the type and intensity of the task, the vGPU technology has four different types of graphics driver:

How do Businesses benefit?

High turnout times, higher efficiency, increased profits and good customer experience are main aims for any business across sectors all over the globe. The power of computing has transformed the way enterprises look, manage and perform their day to day operations. Virtualization solutions using the power of GPU cloud servers have taken this approach to an entirely new level. vGPU cloud servers offer the following benefits

As per a study done by Dell, these are the following metrics that saw a significant improvement in terms of UX when CPU VDI and GPU VDI were compared.

IT professionals benefit from the various monitoring and management tools that come integrated with the vGPU cloud solution. IT industry can now focus on efficient resource management, usage metrics, workstation performance and uptime. Migration is a breeze with real time capabilities and high reliability that ensures lower downtime and no data loss. Migration process is so effortless and seamless that even tasks such as rendering or deep learning continue running on the VMs as if they were never interrupted. Additionally, new VMs can be deployed as quickly as within 10 minutes if the need arises.

Complex tasks requiring high computational processing power such as Artificial Intelligence, Machine Learning and Deep Learning Algorithms, Statistical Models can now be easily carried out using vGPU cloud powered by NVIDIA vCS. AI and ML industry is on the boom right now and there can’t be a better time for GPU virtualization to step in and infuse unprecedented speeds, processing power, reliability as well as data protection in the workflows. Refer infographic below for the possible gains using NVIDIA vCS with V100 GPUs as compared to CPU.

Game Developers can leverage vGPU clouds to effectively and efficiently collaborate on gaming projects while maintaining project timelines and delivering on engaging and immersive gaming experience. Game development is an industry that requires visual artists, modelers, storyboarders and coders to coordinate and collaborate in a seamless manner in order to come out with great games. GPU virtualization can help create 4K or 8K virtual workstations or render farms and scale them as per the project requirements while maintaining seamless work experiences for developers.

Legal firms and finance and accounting enterprises deal with a large amount of documents and complicated calculations with information shared across departments. They can now utilize the power of vGRID PCs to increase responsiveness during tasks such as browsing repositories or calculations; as well as efficiently and reliably sharing information without any data loss. Besides, finance firms can complete calculations, prepare presentations and undertake predictive analysis at blazing fast speeds.

Engineering companies highly rely on CAD/CAM applications such as Catia, Solidworks etc. and other operational applications for R&D, manufacturing, plant design and maintenance streams. Engineering/Automotive companies have scaled up operations and reduced operational overheads by adapting the virtual GPU cloud servers for such graphic intensive tasks

Universities and colleges around the world have integrated computing in teaching and training curriculum while students are required to learn and collaborate on their course projects. Using vGPUs, students can explore and utilize the full potential of applications in their computer labs. Universities can implement new ways of training while providing a richer learning experience overcoming difficulties such as logistics, maintenance, space and investment constraints. Now labs need not be limited by hardware constraints while students attending classroom courses or online courses can experience a seamless and borderless learning regime where the entire knowledge base can be accessed from any location.

Architectural firms realized their projects using applications such as AutoCAD, Revit, 3ds MAX etc. which are highly graphic intensive. Virtualization enables architectural firms to maintain efficient project timelines, collaborative work scheduling and create render farms for batch renders quickly. Client engagement in the workflow is seamless as well as project drafts can be shared quickly and necessary changes made as per their demands.

E2E Networks Ltd is India’s first company to launch cloud computing and virtual GPU cloud servers based on the NVIDIA vGPU technology. E2E has been a pioneer in the field serving customers since 2009 and has been a part of success stories of various Indian startups. E2E offers state of the art cloud based vGPU servers at affordable pricing with support for three NVIDIA GPUs: A100, T4 and RTX 8000.

Why should you choose E2E networks vGPU servers?

E2E was started by industry veterans with one motive in mind: To provide opportunities to budding businesses and enterprises to upscale using the latest world class technology at reasonable costs. This is what makes E2E perfectly suited for small and big Indian companies as compared to others.

E2E Network’s GPU servers run on data centres located in India which translates to lower latency. In terms of latency, the lower the better for a business as latency affects speeds and increases uptime.

E2E Networks affordable and flexible pricing plans help businesses focus their mind and energies on utilizing the brilliant vGPU technology in their workflows rather than on bills. Pricing on an hourly basis makes it flexible rather than a term commitment as compared to other server companies.

E2E GPU cloud servers are powered by NVIDIA Quadro range of GPUs which is the best GPU in the market for compute and graphic intensive tasks. The A100, T4 and RTX 8000 are offered for businesses to choose from depending on their needs and applications.

E2E has been serving Indian companies since 2009 and the customer base has grown to more than 3000 and still counting. It has served startups like Zomato, 1mg, Healthkart etc. and helped them grow into eminent unicorns of India.

“We at CamCom are using E2E GPU servers for a while now and the price-performance is the best in the Indian market. We also have enjoyed a fast turnaround from the support and sales team always. I highly recommend the E2E GPU servers for machine learning, deep learning and Image processing purpose”

To take a free trial please sign up here:- https://bit.ly/3oMKYxN

How you should choose a cloud provider – 7 criteria

E2E Database as a Service (DBaaS)